There is a growing number of everyday applications for artificial intelligence and robotics such as social robots, self-driving cars, and automated shops. We expect that future society will be ubiquitous with various robots. Towards such a robotized society, we aim to study robots that interact with people and operate in harmony alongside them. Such robots are embodied agents with sensory feedback that have the ability to interact in real-time with their environments. Consequently, we conduct fundamental research in intelligent robotics, human interaction, sensor networks, and artificial intelligence (AI). We are aiming for applications in the service industry, elderly care, health care, collaborative workplaces, and learning. Below are some example research themes:

devices will be ubiquitous in our daily life. We investigate techniques to instrument distributed sensor networks to recognize human social behaviors; e.g. state-of-the-art approaches such as deep neural networks (DNN). This enables us to observe peoples’ daily behavior and build models from observed “big data” to provide a comprehensive insight into collective social behavior; e.g. studying one year’s worth of data from pedestrians in a shopping mall. Furthermore, we integrate a sensor network and robots to develop a sophisticated network robot system with “ambient intelligence”.
We made datasets from a shopping mall available, e.g. people trajectories and their interaction with a robot <link> 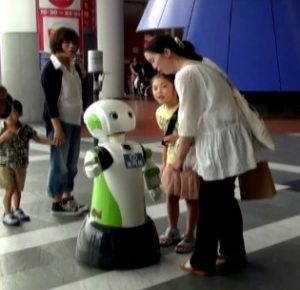 Robots can serve as a natural interface for computer/IoT systems. Hence, we conduct a series of studies for human-robot interaction. One focus is endowing “human likeness” to a robot (both behaviorally and computationally), which will allow it to interact with people in a natural manner. For instance, we have realized human-like interaction using gaze and gesture.

Our recent challenges aim to investigate methods to allow a robot to understand human intuition, and make it interact with people in a morally acceptable way. Further, we investigate the social acceptance of robotic systems “in the wild” with real-world field studies.

We study modeling techniques that reproduce relevant human behaviors in simulation so that a system can anticipate how its behaviors can potentially influence people. For instance, we have developed a pedestrian model and simulated their behaviors around a social robot.

With simulations, a robot can anticipate the gathering of a curious crowd around itself (see figure on the left), or potential bullying from nearby children, so that it can avoid problematic situations before they occur.

Here are listed past and present research projects with the research funding provided by the Japanese government and governmental funding agencies.

Since artificial intelligence and robotics technologies have recently grown fast, it is expected that artificial intelligence and robots will eventually replace various human activities. However, many tasks that are expected to be automated in reality also play a role of bringing feelings of safety to society. Yet, the robots today are still far from providing such safety feelings. They even fail to be considered as moral agents. This project aims to solve this problem by providing moral interaction capability to robots and realize a symbiotic society between people and robots. < link >

This project’s aim was to realize a future city environment in which a social robot roams in a public space and offers useful services, such as information-providing and physical assistance. In order to realize this project, two kinds of research were conducted. The first one was aimed at achieving a technique based on sensor networks that are able to understand how humans use a public place. The second investigation was aimed at enabling a robot to roam the environment without hindering the movement of people while talking kindly to the people passing by. < link >